The question I am asked most frequently since Joel’s passing is one I was often asked during our pregnancy: “How are the children doing?”  I had been hoping to blog an answer to this question before we knew he had gone to be with Jesus, but now I’ll be able to share both before-and-after perspectives.

First, here are precious pictures of each of them holding Joel’s hand:

The short answer is that I think our kids are doing remarkably well.  They talk about Joel often.  Remembering him and reminiscing about various aspects of our experience has become as natural as anything else in our daily routine.  There are moments of tears, still, when we look at pictures or talk about what life would be like if he were here as a healthy member of our family, which is what we had envisioned when we first learned of his existence.  But mostly, the kids are finding unique and meaningful ways to commemorate his life.  They’ve put a lot of energy and time into ‘little’ things that are having big therapeutic value.  None of these has been prescribed for them or suggested by anyone, they’ve just developed naturally.

Hannah and Caleb have recently been obsessed with learning to harmonize.  This started during rehearsals for our church’s Kids’ Choir musical.  They both had short solos and/or a few lines to sing with a friend.  One of the parts was to harmonize with a melody line, and this proved to be a frustrating challenge.  Thus they grew curious about harmony… what is meant by alto/tenor/bass and how to sing those parts.  The two of them began playing and singing and working on this throughout each day.  One of them will start singing a song – hymn, popular tune, kids’ song, whatever – and then the other will join in, attempting to harmonize.  It’s been quite a fun and enjoyable season of life for me to hear them enjoying music together and trying something new.  You can imagine that this trial-and-error approach also results in much dis-harmony at times!  😉

As to how this has become part of their healing?  The song they’ve sung most often is ‘Audrey’s Song’ by the group Selah, otherwise known as ‘I Will Carry You.’  I shared that here on the blog shortly before Joel’s birth.  The words of this song have ministered to all of us but most especially to Hannah and Caleb.  It also inspired them to write ‘Joel’s Song,’ which they have spent quite a few hours playing/singing/refining together… just a simple, tween-written tune, but meaningful as it expresses their love for their brother and the fact that he will always be in our hearts.  Two friends gifted us with the words of “It Is Well With My Soul” in various forms, so this song has been high on their ‘play list’ too.  You can watch one of their practice sessions here:

Hannah and Caleb: It is Well With My Soul

Shortly before Joel’s birth, our kids each received a teddy bear from our church’s pastor and his wife.  Their daughter lost a baby boy named Isaac around 21 weeks gestation, and in response to their loss have been providing ‘Isaac Bears’ to families/siblings going through similar situations.  We took these bears to the hospital, and when the children came to visit while I was in labor we sent one home with each of them.  They brought them back when they came to meet Joel the next morning, and we now have this photo (below) that we really treasure of Joel’s tiny hand on one of these bears. 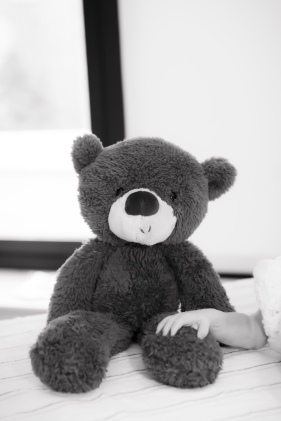 During read-aloud times recently, Hannah and Caleb* began to crochet hats, scarves, and blankets for each of their “Joel Bears,” as we’ve renamed them.  Caleb finished a previously started project as a blanket for his bear, and then Hannah made an adorable little hat for Lydia’s bear, and they just kept going.  Hannah crocheted a collar and matching blanket for Lydia’s bear, followed by similar apparel for her own bear and Sarah’s.  Caleb then crocheted for Julia’s bear.  Here are the finished blankets: 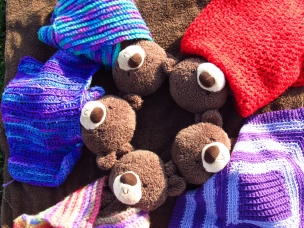 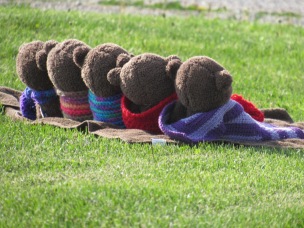 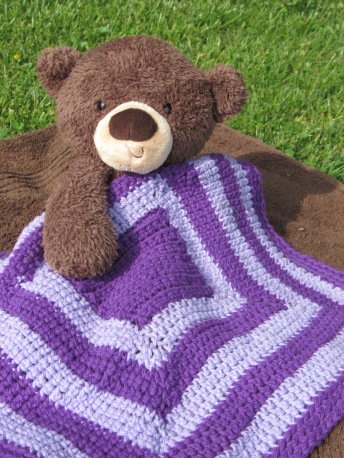 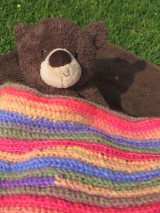 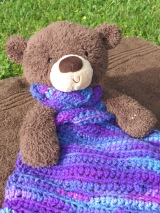 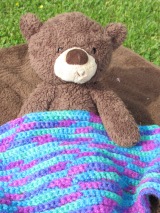 All of the kids have been so ministered-to by the gifts we’ve received in memory of Joel.  A sweet lady we had never met but who had read our blog – a friend of Jeff’s stepmother – brought a crib-sized quilt containing the pictures we shared of each of them holding Joel printed onto the fabric!  It was an amazing gift of time and talent, and upon seeing it we all cried!  It was such a surprise… so personal and such a gift of love.  A friend from church made a pillow with a knitted cover that has Joel’s initials on one side and a heart representing each of us in illusion-style kitting on the other.  It matched a hat she had previously made for Joel.  These are just two examples of the many such gifts we’ve received that have spoken volumes to all of us – and especially to the kids – about the love, care, support, and prayers they represent.  The meals, cards, gift cards,  etc. have not only been practical demonstrations of help and encouragement but truly a testimony to our children as they see the body of Christ in action.  So many of you have been the ‘hands and feet of Christ’ to us, and we’re especially thrilled that the kids have witnessed this in such a first-hand way.  It inspires us greatly to do a better job going forward of being on the giving end of such care, as we now know how tremendously meaningful it was to us. 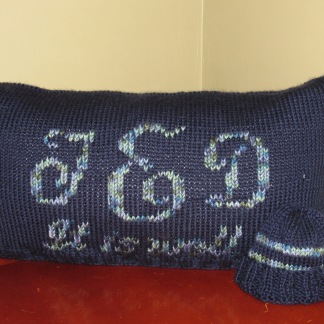 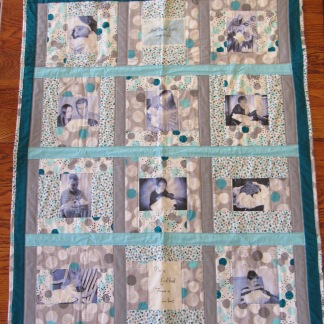 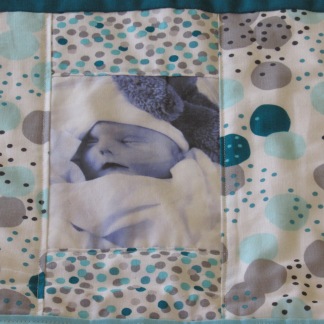 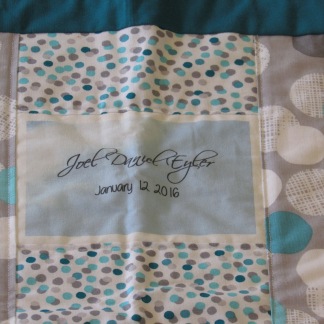 As for the younger three girls?  Well, they’ve drawn countless pictures for Joel or of Joel, they play with their bears, and they talk freely about him.  Julia still kisses my belly when she’s feeling sad about not having him with us, and Sarah writes in her journal.  Their grief was as intense as that of the older kids, though they’ve expressed it in different ways.  Sometimes, the comments catch me off-guard, such as when Julia recently said, “Mommy, I really want you to have another baby soon.  One that doesn’t die.”

By far, Lydia has been the most verbal and unfiltered in her comments about her baby brother.  During our pregnancy, she would reserve most of her conversations about Joel for naptime and bedtime.  When I was laying with her while she fell asleep, she would almost always initiate talk about him.  Early on, at just a few months beyond her second birthday, she started like this:  “Joel is really sick.  He’s going to go to heaven.  God has special medicine in heaven that will make him better.  Then he’ll come back here.”  I’d have to tell her, “Yes, we think Joel will go to live in heaven because he has so many problems with his body.  It doesn’t work well enough for him to live with us here on earth, so he’ll get to go heaven to live with God.  God will give him a new body that works perfectly!  But he won’t be able to come back here.  He’ll get to stay in heaven to worship God.  Then, when it’s our turn to go to heaven, we’ll get to see him there, and we can all worship God together!”

Now, almost daily when we’re snuggling and talking before sleep, she’ll say, “I really miss baby Joel.  I’m really sad that he can’t live with us.”  Or, “Joel’s body didn’t work well.  So we had to put it in a box – ummm, a tas-ket – in the ground.  Now he has a new body that works!”  Another frequent topic for her conversations is about how Joel’s mouth “works” now.  We’ve come to realize that she was troubled by the fact that his mouth was open when he was born, and we couldn’t close it.  A few weeks ago she asked me if Joel’s mouth was still open in heaven.  I explained that Joel had a brand new body that worked perfectly!  His new mouth can open and shut just like ours, and he can sing praises to God with it.

It’s fascinating to hear the thoughts of all of our kids as they make sense of this new concept and the accompanying vocabulary.  When meeting a new friend whose family also had to say goodbye to a stillborn trisomy daughter and are now expecting another (healthy) baby, one of the big sisters ended the conversation by saying, “We hope our new baby lives.”  It’s sad that 2-year-olds and 4-year-olds have to have those types of hopes at such an early age, yet simultaneously precious and honest.  What even I have taken for granted – that our babies would live – we now no longer just ‘assume.’

Julia (5) has recently taken to praying prayers like this:  “Dear God, you know we really miss Joel.  And we want to go to heaven really soon so we can see him.”  Mommy and Daddy and the big kids look at each other with raised eyebrows and wide eyes during these kinds of prayers, and we smile too.  We all know what she means.  “Soon” is a relative term, so yes, we hope we get to see him soon!

All in all, I think the kids are dealing with their grief in really healthy ways.  I love that we are all together, every day, so that music, crocheting, picture-drawing, and conversations happen naturally and are shared by all.  God continues to give us much grace, peace, and even joy as we remember Joel together.

An upcoming post:  The Second Most Frequently Asked Question.  Anyone want to guess what it is?  😉

* P.S.  To those of you who might think it odd that Caleb knows how to crochet – DON’T WORRY!  He’s 100% BOY.  You can’t have four sisters and not learn some of these skills along the way, but this is not his primary hobby!  He’d always rather be fishing, shooting, building, tinkering, carving, riding his bike, etc., but on rare occasions during winter read-alouds, yes, he does crochet.  🙂

One thought on “The Most FAQ”